Although I’ve had sporadic work as an illustrator prior to becoming a full-time freelancer, my first ‘official’ job was a lovely little children’s ebook by first time author Jonathan Robinson called ‘Daylight Robbery.’ The story was told through the eyes of a little girl named Elisa as her more than active imagination led her to believe that pirates were digging up treasure outside of her school. These ‘pirates’ turned out to be inventive bank robbers tunnelling underneath their target, and when Elisa tries to investigate their mysterious van, things get a little hairy for her.

Jonathan was very clear about what he wanted when we first sat down to discuss the project. He’d seen my work on the Age of Revolution comic book series that I draw for Cosmic Anvil, which is all hand-drawn in black and white pen, and wanted a similar style for Daylight Robbery. His other stipulation was that the illustrations be quite minimalistic, but still detailed and emotive – and not too scary. Black and white can be quite a creepy or harsh medium in pen and ink, so the trick for me was clearly going to be taking away some of the edge. We agreed they needed to be “quirky, fun, and positive.”

I always find it helpful for clients to give me some reference images or mood boards to get a clearer idea of what’s in their head, and together we drew influences from Andy Warhol, Ralph Steadman, and Quentin Blake:

Using the manuscript Jonathan had emailed me before the meeting, I also highlighted some of the key features of the story that visually stuck out to me: 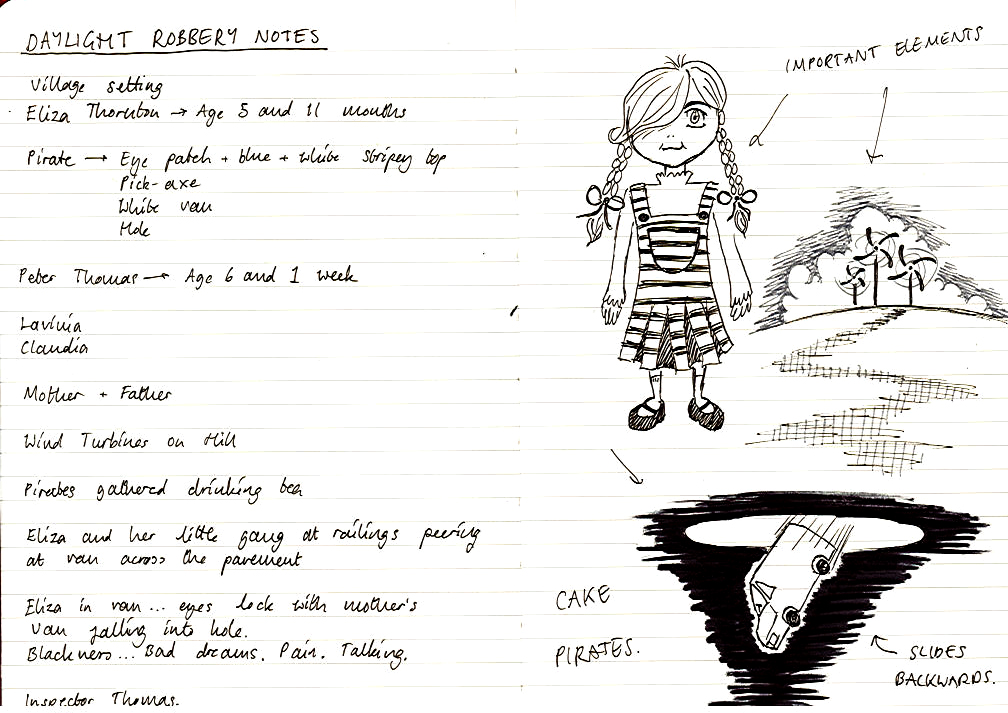 Once I came up with some more solid sketches, I went back to Jonathan for some feedback and he gave me some revisions to make. It turned out I’d interpreted the ‘pirates’ as looking far more builder-y than he’d envisioned them, so I went back to the drawing board to inject some Jack Sparrow into the character:

The rest of the illustrations came easily to me, but I found myself stuck on a cover image. I went back to Jonathan for help and we bounced some ideas off of one another:

We finally settled on this simple but striking composite of symbolic imagery from the story:

Interestingly, Jonathan’s favourite illustration of the set was this one:

Whereas mine is the final one:

I really enjoyed working with such a talented writer like Jonathan (and a really nice guy) and also relished the chance to spend some time working with my ‘bread & butter’ medium – black and white pen & ink. Jonathan has since relocated from Wales to California to continue his day job as a web designer, and Daylight Robbery will be released on Kindle soon… hopefully! 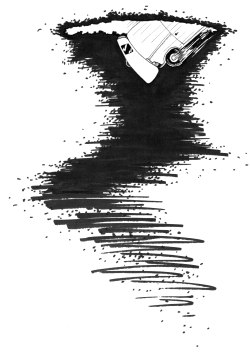